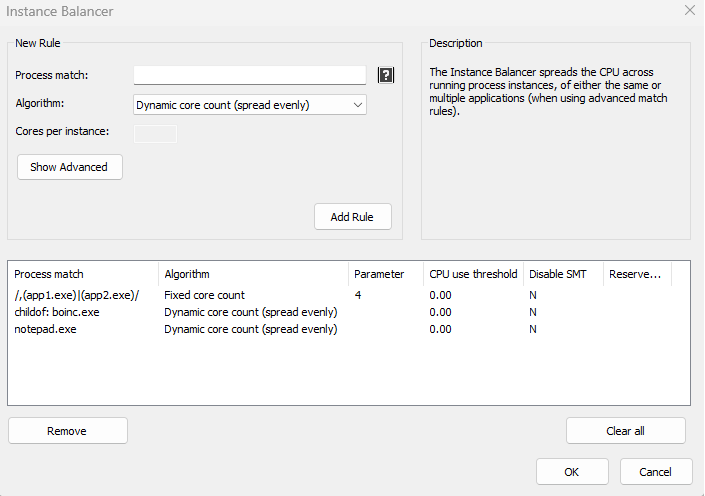 Process Lasso v9.1 has been released! This new version offers several enhancements over the last v9.0 build and a new feature called the Instance Balancer.

The Instance Balancer spreads CPU cores across running process instances, of either the same or multiple applications (when using advanced match rules). For example, if there are 4 instances of notepad.exe running on an 8 core system, each might get 2 CPU cores, depending on the rule. As the instance count of notepad.exe changes, the number of CPU cores allocated to each instance is adjusted.

When there are more instances than allotted CPU cores, instances are ‘stacked’ in a round-robin manner. When the instance count of managed applications changes by new process creation or termination, a re-balance occurs.

Cores per instance
When ‘Fixed core count per instance’ is selected, this is the number of CPU cores that will be assigned to each running instance that matches the rule.
Reserved cores (optional)
This is the number of logical CPU cores per processor group to exclude from the set available to instances matching this rule. Users can use this to reserve CPU cores for other system activity. However, most often, this value should simply be 0.
CPU use threshold (optional)
This is the minimum percent CPU use required before a matching process is included in the set and Instance Balanced according to the rule. This is useful if you want to exclude instances that aren’t using much CPU. This value can be 0 if you don’t want a minimum threshold.
Disable HT/SMT
When checked, physical CPU cores will be selected instead of logical CPU cores. Note that when this feature is used with ‘Fixed core count’ or ‘Reserved cores’, the number of CPU cores specified for those options is still in logical units, so 2 will equal 1 assigned physical CPU.

Other product improvements include a better looking graph legend with numerical readings, smoother listview refreshes, bug fixes and a few areas of refactoring.

We continue to appreciate all our customers. Your support makes Bitsum possible!