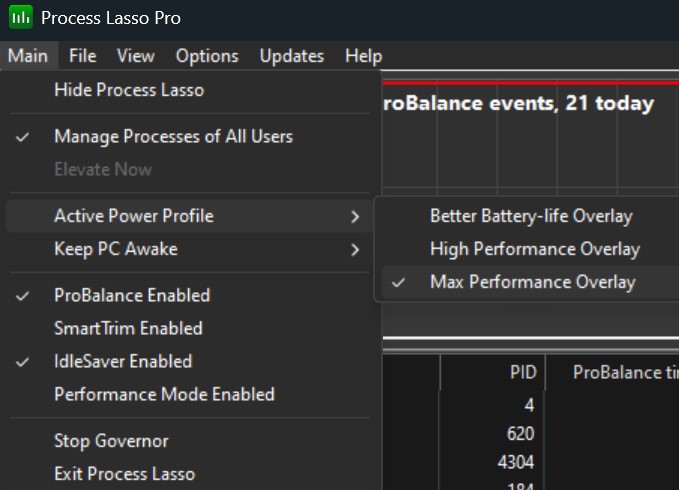 Windows Power Modes are overlays of the Balanced power plan that set the system’s power to performance ratio without changing other power settings such as the sleep timeout. They were introduced in Windows 10, build 1709. Portable device users will only know these modes, while desktop users may need to switch to Balanced, and then to a Power Mode (using the Power Performance Slider in the tray or Power Settings) to see them.

The stock Windows Power Modes are:

Support of Power Modes means that all Process Lasso power automation features can make use of them. For instance, users can specify a Power Mode to be entered whenever a particular process is running, or when the device goes idle. In the case of ParkControl, support means that CPU core parking and frequency scaling can be tuned for the individual Power Modes, and the newly refactored Dynamic Boost feature can be configured to use them.

For further reading on Power Modes and the Performance Power Slider, see this page.

There are multiple valid metrics to represent CPU use. The classical measurement is CPU Time %. This is the percent of available CPU time that the processor spent executing code. The newer measurement, CPU Utility %, is the percent of total computational capacity actually used at the current CPU frequency. It therefore takes into account processor frequency scaling, so will tend to be higher than CPU Time %, and can exceed 100%.

CPU Utility % is used by Task Manager, and now by default in Process Lasso. A new option allows the user to toggle which metric is relied on by the CPU graphs. Process Lasso has always shown both metrics in its status bar, and that continues.

Finally, it is worth noting that this release supports a new Windows CPU topology that allows a single NUMA node to span multiple processor groups, used namely by the AMD 3995WX CPU on Windows 11. Previous editions of Windows would have split the 128 logical CPU cores of the AMD 3995WX into two NUMA nodes bounded by the two processor groups.

We hope you enjoy these new product releases, and appreciate the continued support of our customers that makes further development possible. See the full revision history here.