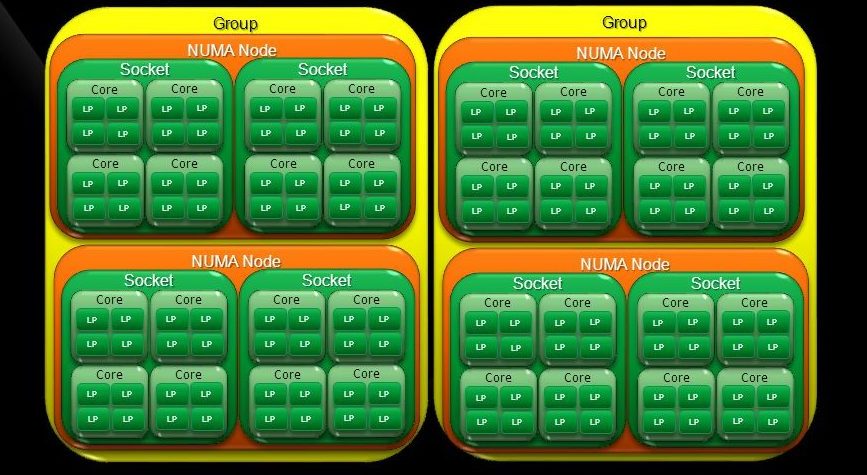 TL;DR – Microsoft hacked in support for more than 64 logical CPU cores by adding ‘processor groups’. Unless an application is written to take advantage of multiple processor groups (group aware), its threads will be scheduled to only a single processor group. See our new groupextend project to enable group unaware apps to make full use of the CPU by scheduling threads to supplemental processor groups, a feature now also available in Process Lasso.

UPDATE – There have been improvements to processor group support in Windows 11 and Windows Server 2022. Application threads are now scheduled across all processor groups without any group awareness required by the application. Read more at MSDN.

UPDATE 2 – CPU Sets are now supported by Process Lasso, and they allow spanning of multiple processor groups. We suggest experimenting with them if you need to assign a process specific CPU cores from multiple groups.

As systems with more than 64 logical CPU cores become common, it is important to understand some fundamental limitations of Windows. When Windows NT was conceived, a 64-bit bitmask was used to represent CPU affinities throughout the system. This seemed like plenty of bit space for the single-core CPUs in use at the time. Now we’ve breached the limits of that bitmask (64 cores). To address this …

The default processor group is assigned in a round-robin manner, typically per-session since CPU affinities are inherited, so that the session load ends up roughly split between the processor groups. Once an application starts, its default (primary) processor group can not be changed.

However, individual threads within an application can be manually assigned to a group other than the application’s default group. SetThreadGroupAffinity and other thread APIs supports specification of the processor group. In this way, an application’s threads can be run on more than one processor group, but they must be manually assigned. Ideally, this is implemented by the application developer, as awareness of what threads are doing and where they should be placed is important.

Often processor groups are composed of less than 64 cores, as they can not span NUMA nodes, and must be equally divided. It would be bizarre to have processor groups of different sizes, causing applications to get more or less cores depending on the processor group they were assigned.

This creates an interesting scenario where a Windows system with up to 64 cores may allow an application access to more cores than does a system with greater than 64 cores.

To demonstrate the impact, we are imagining an application unaware of processor groups, named aptly UnawareOfGroupsApp.exe.

As you can see, our group unaware application has access to 48 CPU cores on a 48 core system, but only 36 on a 72 core system!

If this scenario presents a problem, your options are as follows:

Given this design, users should check check your applications’ group support before upgrading your hardware, and try to choose hardware with CPU core counts that are a multiple of 64 since that will result in maximum size processor groups.

UPDATE Feb 6, 2020: You may be interested in groupextend, a novel new F/OSS app and Process Lasso feature to enable processor group unaware applications to use the entire CPU. Contact us for more information.