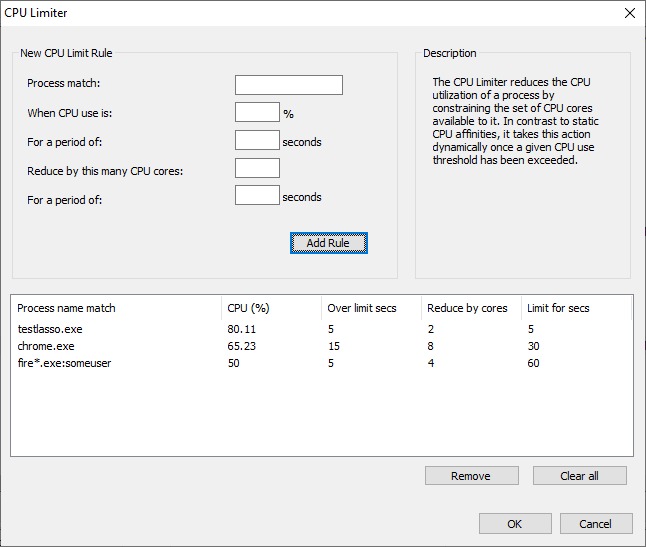 The CPU Limiter offers a graceful way to dynamically limit CPU utilization of an application when it exceeds a set threshold. It does this by temporarily constraining the number of CPU cores a process has access to. It selects which CPU cores to remove from the process randomly. For specific CPU core assignments, use persistent CPU affinities or Watchdog rules.

Like other types of rules, you can optionally on match the user name by appending them with a colon. So if you wanted to limit the CPU usage of chrome.exe for Jack.Smith, then define the match string as ‘chrome.exe:jack.smith’. You can use wildcards for both the process and user names.

We’ve also increased the precision of per-process CPU utilization to the hundredths. This is important for high-core-count systems where it takes considerable CPU use to add up to even 1%.

The Options menu is now more navigable with some rough categorization of the various functions available in Process Lasso.

Another notable change is a refactored SmartTrim, now offering the ability to purge the stand-by list (RAM cache) when a threshold is reached. Previously it only offered a selective trim of working sets when per-process quotes were exceeded. This is a popular tweak in the gaming community, and we aim to please. However, we still don’t recommend general use of this feature.

Finally, our already excellent product updater now makes use of standard Windows notifications, thus adhering to any ‘Do not disturb’ preferences. The optional prompt-less updater has also been certified to be entirely silent, not interrupting full-screen activities like gaming.