MOVE, AND LINK — RELOCATE FOLDER TO ANOTHER DRIVE WITH NO PATH CHANGE

JunctionMaster is a small and simple shell extension that will allow you to MOVE and LINK a folder in one easy step. It focuses on MOVING the folder, then replacing the original folder with a hard link (junction) to the new location. Windows (and the user) can reference the files at the same location as before, but the actual storage of them is on the other drive. It is handy for new hard drives, and also in the case of SSDs where you may wish to redirect some folders with lots of RW activity to a conventional HDD.

For instance, if you bought a new hard drive you might wish to move some large folders without having to change their paths? For instance, having it store the stuff in c:\movies, but not having the path of c:\movies change. This is what JunctionMaster will do. It would move the files to f:\movies, but c:\movies still accesses them just the same (with no perceptible difference at all in the shell until Windows 7, where it now shows a link overlay on the folder icon). You must be CAREFUL though as deleting the files from either location will delete them in both (since only one real copy exists).

Right-click on folder in explorer

No reboot required after installation to see this!

For those who do not know what NTFS Junctions (or hard links) are, they are links from one folder to another. This can make your folder at “c:\myfolder” actually have its files contained by “f:\bigstorage”. This feature has been built into NTFS for many years, but never made full advantage of. Once you create a junction, the files there are stored at the target (f:\bigstore in the above example). However, if you delete the files from EITHER location then you will delete all the files. That is why you must be CAREFUL with them, as this accident could happen. If you need to REMOVE a junction, fire up JunctionMaster and let it do it for you.

As stated, JunctionMaster is mostly a shell extension. After installation, right click on a folder in explorer (the Windows shell, or you could just say Windows). You’ll see a link to JunctionMaster, allowing you to easily move that folder to another drive and create a junction (hard link) so everything works just like it did before.

If you simply run JunctionMaster from the start menu, then you’ll get a dialog allowing you to find and remove junctions.

AFTER RELOCATING A FOLDER, IT MAY APPEAR TO BE GONE FROM EXPLORER UNTIL YOU REFRESH (F5) – SO DO NOT FREAK OUT. 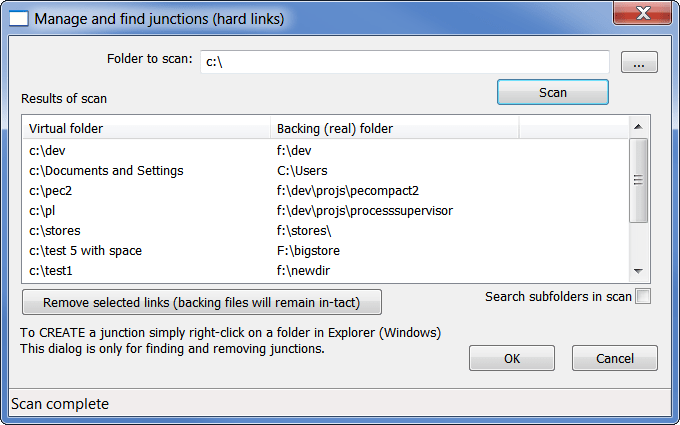